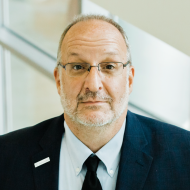 David Ussery
I work with high-throughput genomics.
This user account status is Approved

This user has not added any information to their profile yet.

Professor David Ussery was born and raised in Springdale, Arkansas. He has been working with bioinformatic analysis of bacterial genomes since the first sequence was published in 1995, and published one of the first text books in the field of Comparative Genomics. His team has published more than 200 papers, which have been cited more than 15,000 times, including three papers with more than a thousand citations. He has been a co-applicant on grants funded totaling more than $30 million, since 2010. His popular course on Comparative Genomics, taught at The Technical University of Denmark from 1997 - 2015, is now taught in the spring semesters at UAMS; one-week workshops based on this course have been held in North and South America, Europe, Asia, and Africa. Prof. Ussery has collaborative projects with groups in Belgium, Denmark, France, Germany, The Netherlands, Norway, Spain, Sweden, and the UK, as well as in the U.S.

Prior to joining UAMS, Dr. Ussery was the Comparative Genomics Group lead at Oak Ridge National Labs, in Oak Ridge, Tennessee (2013-2016). He led the Comparative Microbial Genomics group at The Technical University of Denmark from 1997 – 2013, where he has successfully supervised more than 20 Ph.D. students in bioinformatics.

Prof. Ussery received a doctorate in Molecular Biology in1993 from The University of Cincinnati College of Medicine and did a post-doctoral fellowship at Oxford University (1992-1996). He earned his master’s degree in biophysical chemistry at the University of New Mexico in Albuquerque. He earned a bachelor’s degree in chemistry from William Jewell College (Liberty, Missouri) in 1982, and graduated from Springdale High School (Springdale, Arkansas) in 1978.

Under Dr. David Ussery's leadership, ArC-GEM's work in third-generation sequencing has exciting potential applications for a range of emerging infections, including current collaboration with the Arkansas Department of Health on a project that could lead to rapid diagnosis of the Zika virus.
On Feb. 21, Dr. Ussery was invested as the inaugural recipient of the Helen Adams & Arkansas Research Alliance (ARA) Endowed Chair in Biomedical Informatics.
Read more...